Limitations to the Exercise of Freedom of Expression Annual Report /Argentina, 2012

Fundación LED has submitted its Annual Report on Limitations to the exercise of Freedom of Expression in Argentina during 2012.

Fundación LED is a non-profit organization devoted to the protection of Human Rights and the defense of freedom of expression, to citizenship building and social monitoring of public resources allocated to advertising Government actions.

This paper covers attacks, assaults, threats or intimidation suffered by individual journalists or media (including restricted Access to Public Information on some occasions), and any and all acts of censorship reported by agencies and citizens, which were brought to Fundación LED´s attention.

A special section of the Report is an in-depth analysis of the evolution of Government advertising, including the TV show Fútbol para Todos (Football for Everybody in English), other sport shows and the allocation of funds to state-owned companies in the Communications Sector.

The chapter on the enforcement of the Law on Audiovisual Communication Services focusses on the conflicting relationship between the National Executive Branch and the Judiciary as a consequence of several complaints brought to challenge the constitutionality of such Law. This is viewed by different players in Argentina´s institutional life as if republican practices were moving backwards in the country.

This paper is based on data published by different local and foreign media, on reports by civil society organizations and government agencies, and on presentations made directly to this Foundation by those who were affected.

These sources have revealed the occurrence of 371 cases which in this Foundation´s opinion are about Freedom of Expression in our country and may be classified as follows:

LIMITATIONS ON FREEDOM OF EXPRESSION IN ARGENTINA DURING 2012

BROKEN DOWN BY CATEGORY 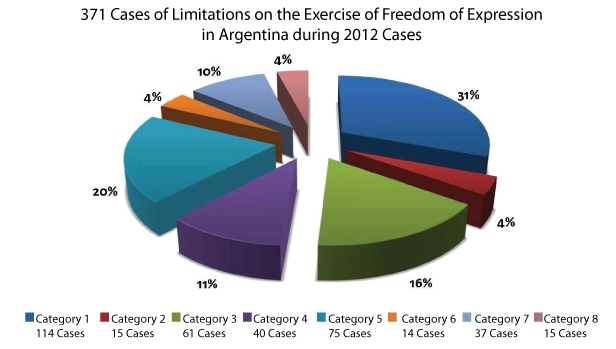 Just as in the mid-term report, the cases described have been listed chronologically top down from January 2012 on, quoting relevant data sources.

The outcome of this report, both as regards the quantitative increase of cases recorded and the seriousness and complexity of the situations reported, reveals the need to build awareness deep down in the Argentine society in connection with the fundamental role that the rights advocated by Fundación LED play in any modern democracy.